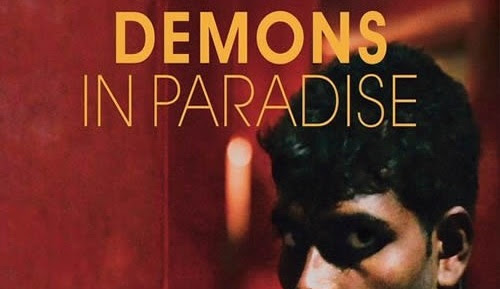 A peepal tree/Bodhi tree is shown being cut down in the last scenes of the documentary film ‘Demons in Paradise’. The Director of the film, Jude Ratnam seemed intent on making the audience feel that when the last branch of that peepal tree was cut down that similarly the “Tamil people’s dream for a separate Eelam” had also been completely cut down. To some extent he has succeeded in creating that feel.

Although he does that, he goes past questions as to why did the dream of a ‘separate Eelam’ come into being, or whether it was the dream of only a select few people, by using just a few surface level conversations and instead moves towards speaking about the internecine killings between militant groups during the early war period. Through that he has wished to write an epilogue that the armed struggle should necessarily be defeated. The problem arises here.

Jude Ratnam begins ‘Demons in Paradise’ from his own experience as the 5 year old son of a family fleeing (from Colombo to Jaffna) the 1983 ethnic riots which deliberately targeted the Tamil community. He mentions in the film that that the riots and the days that followed made him realise the necessity of a separate Eelam.

The dream for a separate Eelam and the journey towards that did not begin with the 1983 ethnic riots. The struggle for a separate Eelam followed in the course of the political struggle that fought against the oppression of the Tamils in independent Ceylon/Sri Lanka. The failure of non-violent (Ahimsa) struggles gave rise to the armed struggle. The need for that struggle was brought home to the Tamils in the South through the 1983 July ethnic riots. The Director instead stands atop the debris caused by the last phase of the war and aims his criticisms at the armed struggle while staying away from these essential facts. Questions arise regarding the fundamentals of the product when it is a wholesale criticism of one side.

No struggle for the political rights of the Tamil people can be considered as being beyond criticism. The writer of this article as a son of a community which had engaged in a long drawn armed struggle, and a person who has lived in conflict areas has continuously opined that the consequences of that struggle should be subject to decisive discussion. But, the writer also wishes to point out that a creator’s freedom cannot be said to be one free from any kind of criticism.

This is because, the scenes shown in the film and the former rebels who are the main characters in the film are seen speaking mainly about the internecine killings. There is no completeness in their talk. Some of their words have been cut off midway. What are the issues spoken there? Why have they been cut midway?

Further, why has the film shied away from speaking about the occupation and the destruction caused by other parties including the Sri Lankan Armed forces and the IPKF? The issues raised in ‘Demons in Paradise’ are incomplete when the film completely ignores the days in which thousands were mercilessly massacred at Mullivaikkal. It raises the suspicion as to whether the film was made to meet to needs of some other basis.

In the end scenes of the movie Jude Ratnam states, ‘I wished that the Tamil Tigers be defeated, even if people (members of my community) were killed I wanted the war to end.’ He has expressed his opinion as someone who has observed the war from Colombo, but is such an opinion one that is truly ethical?

The writer here does not express the wish for war to go on for a long period and large levels of destruction to occur, instead he deeply despises war as a Tamil who had been born into this war and who faced war as a living reality till the year 2000. But, the writer stumbled and was shaken when faced with the thought process put forward in the film that finishing the war could come at the cost of killing many people.

After the screening of the film was over, the Director was asked by a member of the audience whether he still agreed with his statement in the movie that the war should be ended even if people were killed, he had no hesitation in replying with an ‘Yes’.

The Director, who raises ethical questions about the internecine killings during the armed struggle in the 1980s and 1990s and tries to prove that the dream of a separate Eelam has been cut down, stays aloof from discussing the ethical issues that arise regarding the last phase of the war. He fudges away from responding to that. This increases one’s suspicion about him. The suspicions raised in this article do not try in any way to deny the right of freedom of expression and creation to Jude Ratnam. Instead, they should be seen as those raised by the son of an affected community.

Indeed, it is an important stage in the path forward, to talk about the past and to correct any wrongs. But, speaking only one part of the truth for certain reasons and ignoring other parts of the truth, wrongly rewrites history. ‘Demons in Paradise’ takes some truths as facts and escapes from speaking the larger truths. It is not just a miscarriage; it is so weak that it cannot be saved through any medical assistance.

The writer makes these observations after attending the screening of ‘Demons in Paradise’ in Colombo on Thursday, June 29th

*The writer is an independent Journalist and Columnist. This is a translation of the original in Tamil.